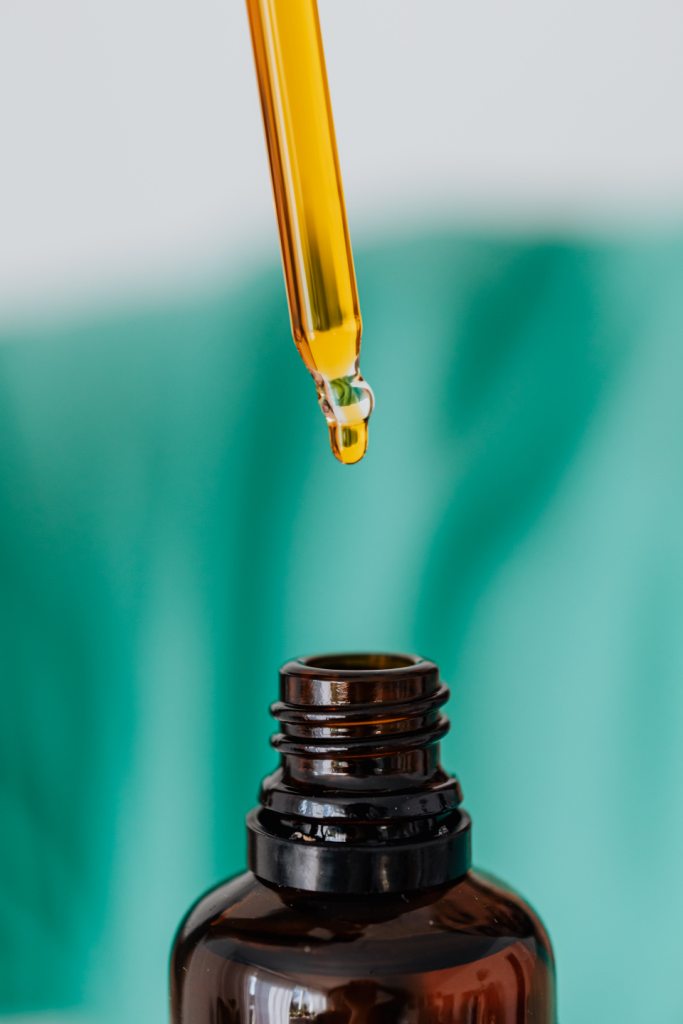 There were a few simple deep conditioners, leave in sprays, couple of whipped butters. Recently, I tried an Almond Butter Hair and Face Mask. But that’s as far as my aspirations went…except for oils.

I will mix oils for days!

And the oil mix that I’m currently using was originally based on an OG Naptural85 recipe from 2012 for hair and body oil. I’ve mentioned her loads. If you’ve done any research on type 4 hair or spent a little time on natural hair YouTube, you’ll have heard of the founder of Melanin Haircare, Whitney White, Naptural85.

What I love about this video is that she explains why each oil is being put into the mix. The first time I did this, I think I had everything she had except for Avocado oil which I exchanged for Marula and Grapeseed.

The base of her oil blend and pretty much the oils I add into mine every time I make it are:

She has a great tip, especially for the money conscious of us out there, is that the less expensive the oil, the more she adds. I guess the fancier oils are just for an extra special sprinkle of luxury if and when you can. She suggests you put it in an applicator bottle for ease of use. She also suggests using it to seal in moisture after cleansing or a hot oil treatment, this can used in place of lotion after a shower on damp skin. I’ve never used it that way but why not?

I honestly think that as long as you’ve bought or have oils that have proven benefits for hair, then there is no right or wrong way to do this. If you’re after moisture, use more moisturising/penetrating oils. But if you need sealing, use sealing oils. If you’re hair reacts better to lighter oils, leave out the heavy oils. And if it needs heavier oils, then use heavier oils.

Here are two great starting points on moisturising or sealing oils, if you need more info:

Obviously, pay attention to allergies, how your hair reacts but it really doesn’t need to be a super intensive piece of work to create an oil blend. And if you don’t want to DIY, there are loads of great pre-mixed oil blends like the Flora & Curl African Citrus Superfruit Hair Oil or Jim + Henry Five to name just  two that I’ve very much enjoyed using.

One thing I did notice was that her recipe does not contain any Essential Oils which can give a mix an little extra oomph and a delightful scent. I’ll explore it in a later post but, from time to time, I use Lemon, Grapefruit, Peppermint, Tea Tree and Rosemary. There are some others but these are my most used.

My Most Recent Mix

A bottle with measurements on makes a huge difference. However, it’s not so great if you’re wanting to make up a large batch at once because obviously, this small bottle can only hold so much.
I actually recently used an old 2 litre pop bottle and marked out every 100ml for ease of measuring bigger amounts, it’s more for eyeing the ratios than the actual millilitres though. 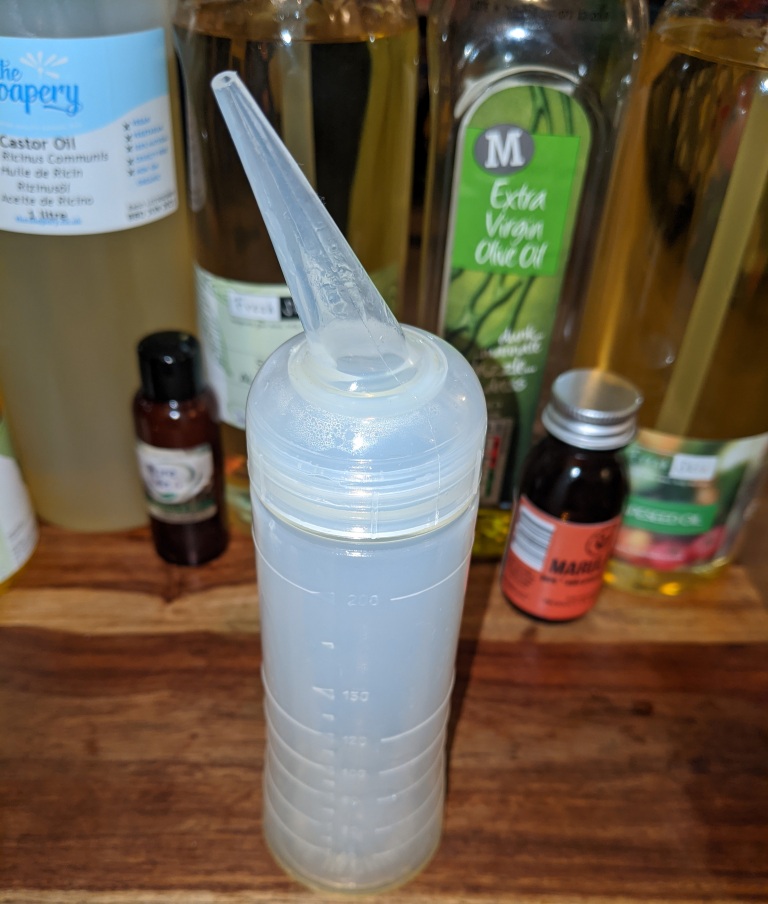 Bottles with these applicator tips are great if you want to put it straight onto your scalp. I’ve actually found this botte really useful for getting shampoo onto my scalp if you dilute it with water.

And There You Have It 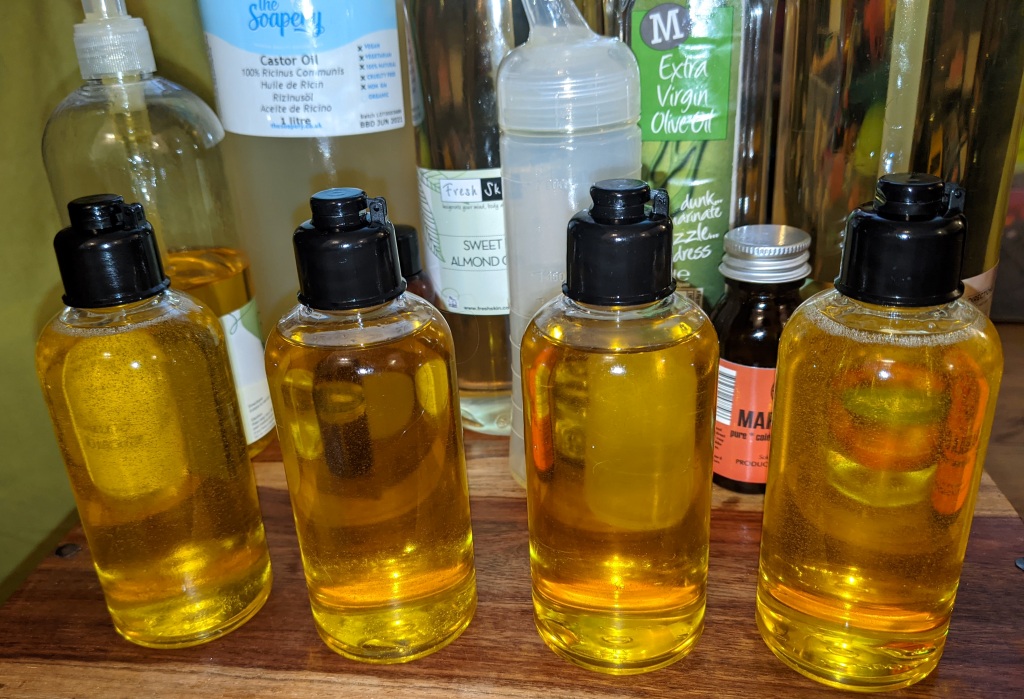 Like I said, I like to make up a batch and it’s different every time because I don’t make a note of measurements and use what I have in stock but it seems to work just as well. So in honour of the person who’s given me my oil base to work with, I always refer to this as my Nap85 Oil. However, she’s obviously gone on and tweaked this mix into a commercial product that many people love. And I have a bottle at home, ready to try…after I get through a few more bottles of my own special blend.
Let’s keep oiling together!
xx Lee xx
—————————————————————————————————-
Let’s connect
Down in the comments:⬇️ Do you mix your own oils? What are your staple ingredients?
Subscribe
Instagram: @woefultofrofull
Email: [email protected]
Facebook: Woeful To FroFull
Twitter: @woefultofrofull
Pinterest: Woeful To FroFull
Reddit: WoefulToFroFull (but honestly, I mainly post about Disney Emoji Blitz!)
Tumblr: WoefulToFroFull
Ko-fi (giving a small tip): Woeful To FroFull
My other blog: WoefulWrites.wordpress.com
Tagged castor oil, coily hair, curly hair, diy recipe for hair, diys, grapeseed oil, hair oil, jojoba oil, kinky hair, lco method, LOC Method, melanin haircare, moisturising oils, naptural85, natural hair, natural kitchenista, naturalista, naturally curly, oil blend, oil mix, olive oil, sealing oils, sweet almond oil, type 4 hair, vitamin e, whitney white, woeful to frofull, woefultofrofull