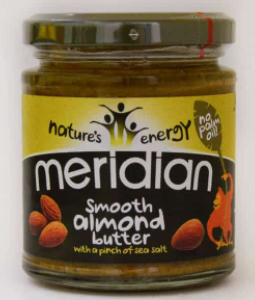 Almonds are good for your hair. I wrote about some benefits not too long ago. Many haircare products that you buy contain Almond Oil. But what about Almond Butter? I knew it existed so why weren’t the hair community making a fuss about it. Soon after that thought, I  set out on a mission to find a way to incorporate this version of Almond into my routine. I found an Almond Butter recipe a few years ago. It seemed legit, so when  I saw Almond Butter for sale a few weeks later at Aldi or Lidl AND on offer, I had to have it. But then could I find the recipe? Could I find any recipe?

Those are rhetorical questions but the answer is no. 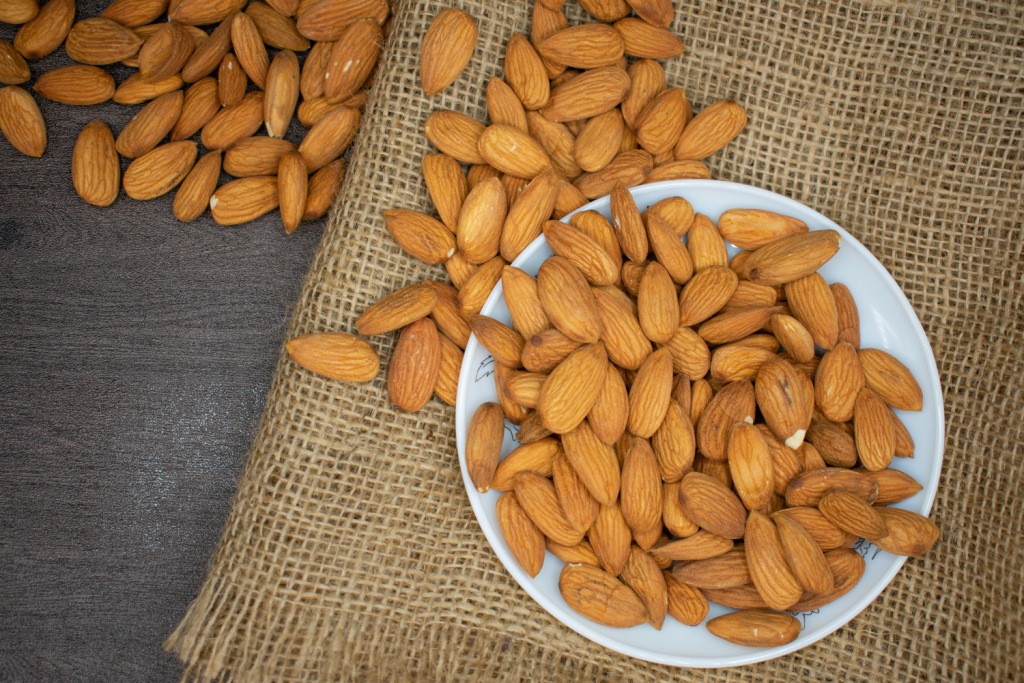 In the absence of a dedicated Almond Butter recipe,  I thought I’d use a Peanut Butter recipe, because one nut butter is as good as another nut butter? I’m not a nutty person so it’s all the same to me. But then, nothing happened for like 2 years. However, in the spirit of trying to end my product junkie ways, I made the intentional decision to actually use stuff that had been lingering in my cupboards to make more space for the products I love. And the Almond Butter was one of the first to have at it.

So I looked again and voila! An Almond Butter recipe appeared for my hair. Like out of thin Google air.

The recipe I found was from Apsara Skincare and was pretty simple. I only needed:

I returned to my dusty, neglected, possibly out of date jar of Almond Butter to find there was a layer of liquid on top, Almond Oil? I tried to stir it through to reincorporate it but I realised that the nut butter was hard. Super hard.

I started to fill my measuring cup with Almond Butter but I realised, firstly, it was too hard and secondly, I’d have too much if I carried on, so I stopped at about two thirds full. To soften the Butter, I put it in the microwave, unfortunately, it didn’t seem to make too much of a difference. I “persevered” onwards. I added Sweet Almond Oil and Avocado Oil (instead of Coconut Oil as Avocado comes up as its top alternative). Even though the recipe gives specific amounts, I kind of just guessed. And added oil until I could sort of force the Almond Butter to absorb it and start mixing.

I also added a splash of Vitamin E because, well, Vitamin E! It’s funny while I’m writing this post that I’ve only just realised that I was missing the Coconut Milk. Yikes!

You know when something says it’s smooth, what does that conjure up for you? For me – something that’s silky and nice to touch. This hair mask was not. Smooth Almond Butter ain’t that smooth. I didn’t enjoy putting this mask in my hair at all. I didn’t like the overpowering smell, I didn’t like the gritty texture, I didn’t like how runny it was (perhaps I shouldn’t have guesstimated the oil!), I was most certainly not a fan. Also, I should have probably decanted the runny mixture into a bottle rather than trying to scoop it out of a bowl with my hands whilst in the shower. It still would have been as messy as hell but easier to apply.

I tried to comb it through to make sure it was evenly distributed but it felt like I was combing through three times as much hair as I actually have. The hair version of walking through treacle. I wrangled my hair into 4 twists and placed it under my Hair Therapy Wrap heated cap.

I was still sandy…and so was my shower tray. It looked like I’d just had a really good time at the beach.

I did an ACV rinse (3 tbsps ACV to 24 Oz water and 3-5 drops of lemon and tea tree essential oils). The essential oils while good for your hair, really help to mask the vinegary-ness of of it all.

I think I could have rinsed 10 more times and perhaps I should have but I couldn’t really put my hair through that much stress. So I moved on to moisturising. 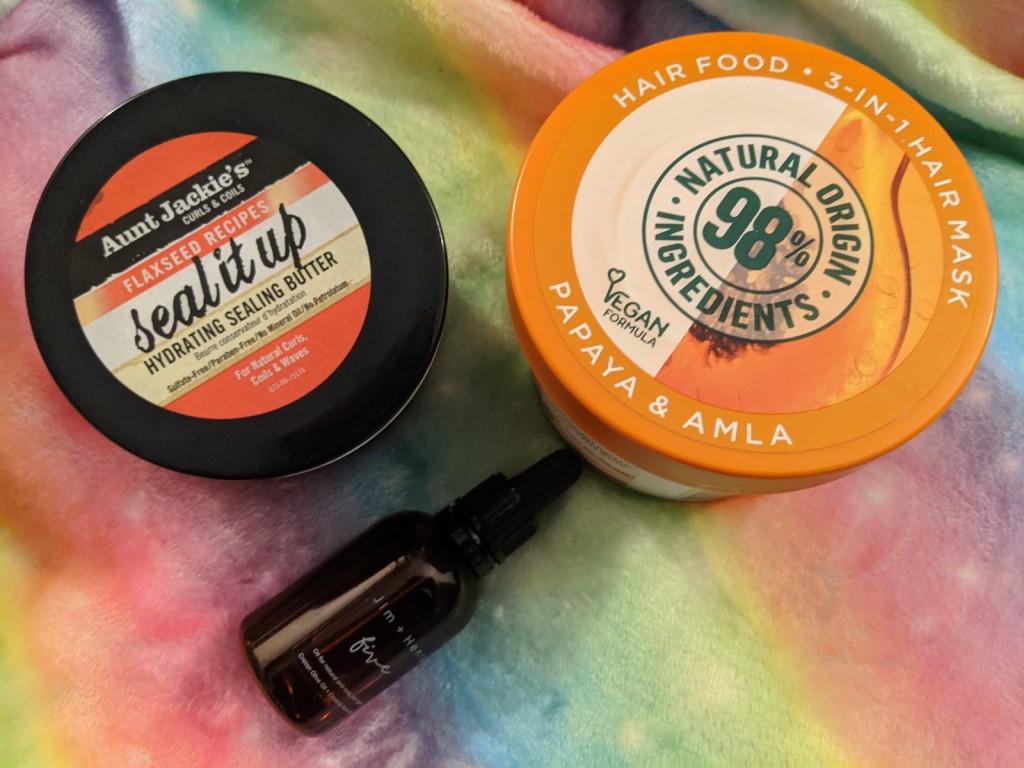 For my leave in, I went for the Garnier Papaya Hair Food. I usually use this product as my deep conditioner but they claim it can be a conditioner, hair mask or a leave in. Plus it smells lush which might mask any lingering Almondy-ness.
I followed up with the Aunt Jackie’s Seal It Up Butter which works a treat.
And finally sealed it all in with Jim + Henry Five.
At the end of the process, my hair was smelling amazing – a mix of the ACV rinse and the Papaya Hair Food, I’m sure. 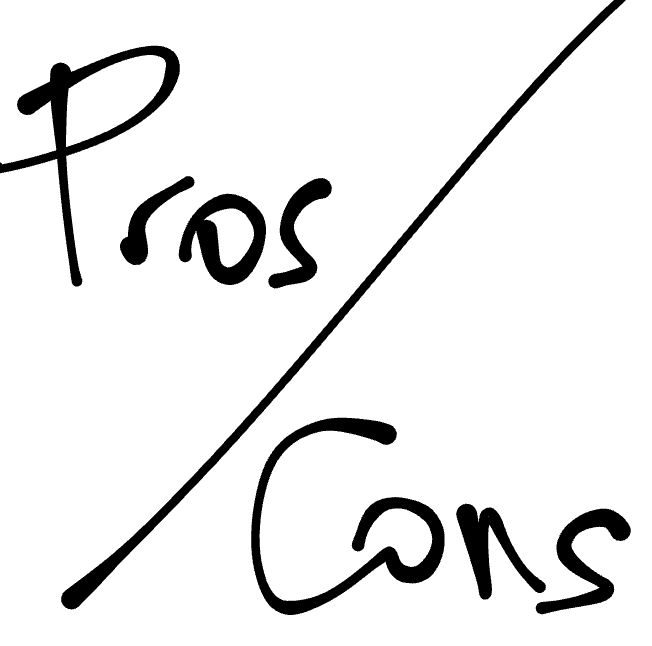 Pros – After this ordeal – my hair felt so soft. Impressively soft. I was loving how it looked, I wouldn’t  say my hair is super coily but in the places where the coils reside, they were popping or rather they were “coiling”?! Very springy indeed.
Cons – My hair was covered in grit and it was in there for a considerable amount of time. After carefully rinsing my hair in sections, then rinsing with an ACV rinse, then rinsing with water and rinsing with water again, I was still full of it. Considering it was “smooth” Almond Butter, my hair felt anything but.
So as you’ve probably gathered, I won’t be doing this again but I’m glad I tried. If I can find Almond Butter with the consistency of Shea Butter, I might reconsider but I’m not sure that exists so this just goes into the memory box for now.
Let’s keep sabotaging our hair together! 😢
xx Lee xx   And to you all, single, not single, entangled even – Happy Valentine’s Day! 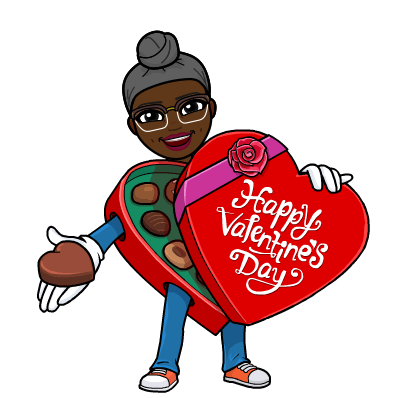