I’ve been looking for an easy and effective leave-in spray for myself and the kids. Plus I am really into the idea of making as many of my own products for my hair as possible. I wasn’t sure how to start so I went to my favourite place after Google…Pinterest. I had a picture of a leave-in spray saved on one of my boards and as I had all the ingredients in my cupboard, there was no reason not to try it.

It says that it is a great recipe to keep curls defined overnight which obviously isn’t an issue for me at the moment but a godsend for the sprogs. It’s a simple mix of Glycerin, Water and Oil. I used Flaxseed Oil because I’d been liking it as a sealant and is a light oil which is advised for low porosity hair like mine. I’d never used Glycerin before so I was interested to see what effect it had on my hair. It’s a humectant like honey so not usually advised to be used in winter but maybe me and the kids are an anomaly or we are just doing everything else right so it was impacting us negatively because our hair was the most moisturised it’d ever been. Maybe we can use humectants all year round? Or it was the most moisturised it had ever been since I really started paying attention. But just in case the glycerin wasn’t as good as I thought, I was using the spray mostly at night and a simple mix of Aloe Vera Juice and Water for the daytime. 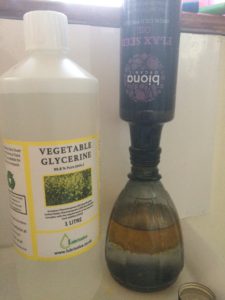 After about a week, even though I felt it had a positive effect on our hair, it was a complete safety hazard. In all the rooms I am likely to do our hair, (the kitchen, the bathroom, the living room), we have hard floors and to say there were a few slips would be an understatement. I did find the whole mixture too oily so if I tried it again it would be a chance for me to work on the proportions i.e. a whole lot less oil.

I also made the mistake of adding Lavender because it smells nice and Lavender is meant to be soothing and relaxing which in turn would soothe and relax the kids before bed. Turns out my daughter hates it though! She kept complaining that it was “making her breath funny.” This was her way of saying she didn’t like the smell. Also, it needed to be used quickly after shaking the bottle as the different elements separated so quickly. An interesting first foray into leave-ins and I actually learnt quite a lot but I wouldn’t use it in the same way again.

So my second attempt was described as a braid spray which worked because I was planning on having the kid’s hair in more protective styles, if only to save me from constant detangling, crying and fairy knots. This time around we had Water, Glycerin, Aloe Vera Gel, Tea Tree and Peppermint Oil. And this one had measurements too! It made a thick clear spray that moisturised my hair well and defined my kids curls, especially my eldest son. Now I felt it was doing wonders until wash day came and there was all this grey gunk in my kid’s hair (type 3 and 4 hair). Not nice at all! And such a shame because the overall results were amazing. However, when used in my type 4 hair, I didn’t have the same issue so it could have been due to the kids hair type, maybe I was using too much or a reaction to something else in their hair.

I wasn’t completely sure if it was the Glycerin, the Gel or a combination of both. Since I hadn’t had an issue with the first spray which contained Glycerin I deduced it must have been the Aloe Vera Gel that I’d never used before. When it came round to making another batch, I decreased the amount of Gel and replaced the missing volume with Aloe Vera Juice (Aloe Vera Juice unfortunately stops it from being clear). I am so happy with this mixture and have been using it successfully for a few weeks. 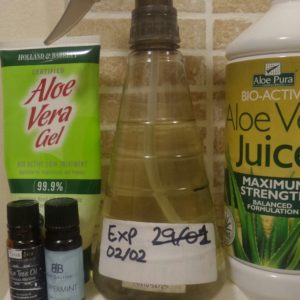 I would really recommend it or your own variation. The only drawback is that it needs to be stored in the fridge and according to Donna Marie Hair and Beauty it has a shelf life of about 2 weeks. Hence my scribble on the bottle to stop me going past the use by date.

We’ve not needed to worry about expiration as we’ve been getting through it like crazy. DIY Leave-In sorted! I’ll probably experiment with the ratios a bit but I’m really feeling these ingredients and would highly suggest you give it a go!

Comments welcome below. Have you ever made a leave in spray? What’s your recipe? 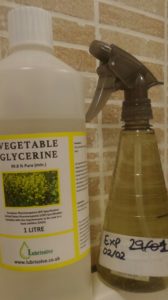