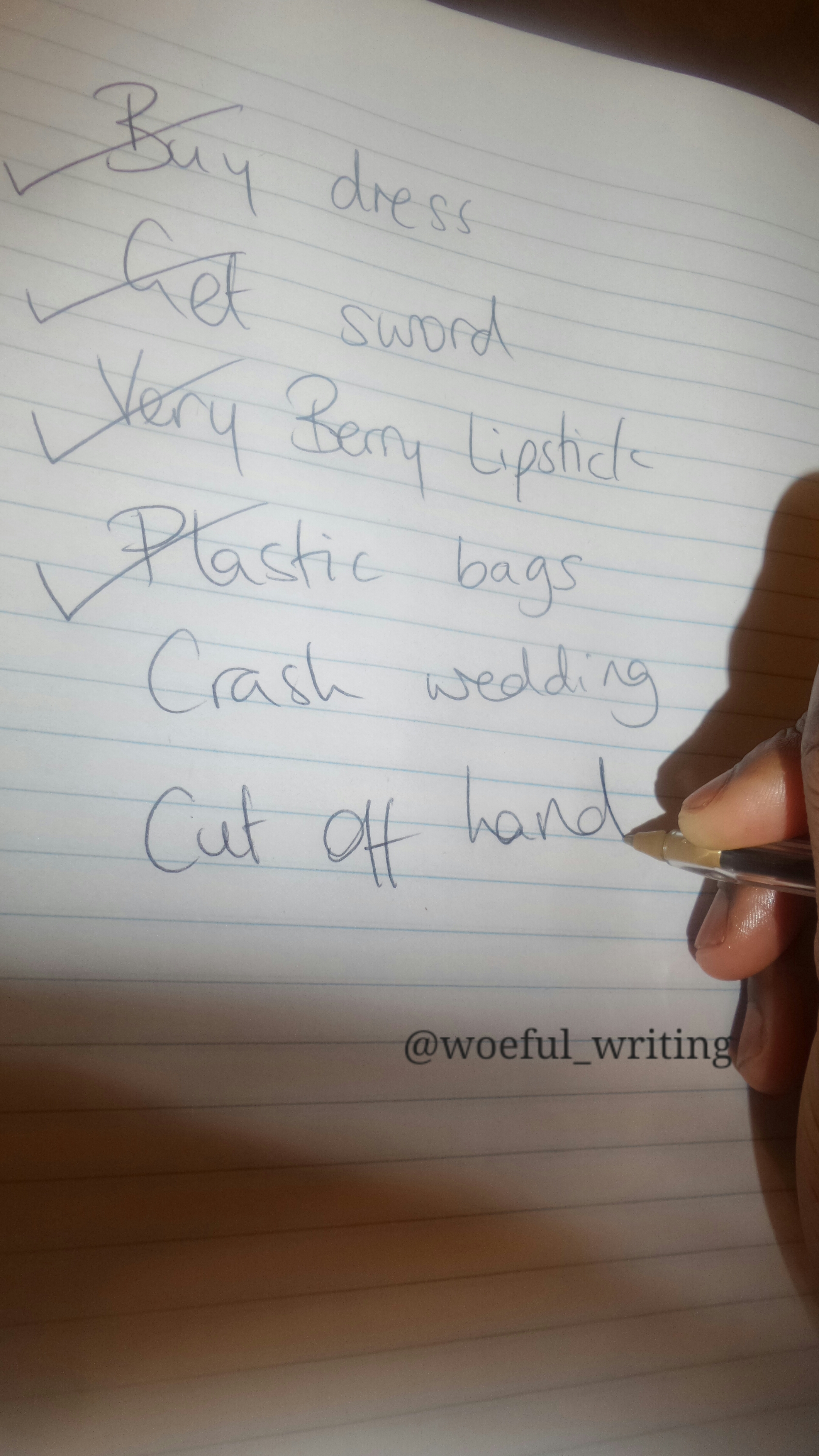 Here we go again! I don’t remember where this week’s idea came from but I really liked it (if I do say so myself). The premise is basically that you have to ruin the biggest day of someone’s life to save the world. I wrote my first 1000 words of this story but I’m not completely happy with them, not because the premise isn’t good, I think it is but because I have a lot of ideas and even after writing this, I keep changing my mind about the direction it’s going. So in short, the idea works for me, my execution is a bit shoddy but I do see where I can make it work better. I want to make it better. Anyway, I hope you enjoy what I’ve done so far, please remember this isn’t the finished article, it’s a very rough first draft of an idea. Time to share…

“So I have to gatecrash my ex-boyfriend’s wedding today because it turns out that he’s needed on a mission to save the world! When I say ‘he’ what I really mean is his hand. Just his hand.

Ok, I think you might need some background here and really, where to begin? After that romantic meal we had watching the sun set on the beach with ice cream and champagne? Do I start with being dumped weeks before my own wedding day? Or 300 years ago when the Gatherex decided to emerge from a volcano in Hawaii one sunny October day? I suppose that’s the best place to start, the very beginning.

As you may or may not know, Hawaii is a volcanic island. What you probably don’t know is that volcano erupted one day and lava didn’t come out but a tiger like humanoid species who have apparently been living under our feet since the beginning of time did. To keep things short, it wasn’t peaceful when they first came and even now, hundreds of years later there are still tensions that run deep. At my not-wedding, my side of the aisle would have been pretty thin on the ground, my family are all about keeping the species pure. But I fell in love with a Gatherex, a prince no less but he dumped me and I am over it, I am. I don’t think about him. Ever. Hardly ever. Infrequently. Ok, so every now and then. But I am over it, mostly.

Anyway, turns out his hand is the key to save our world from complete destruction from another non-human species. I happen to be the bridge between us and the Gatherex, who knew? Who are the threat? From what I’ve learnt the Gatherex where an experiment by an alien race, it didn’t work out so they dumped them here under the Earth’s crust, they procreated, grew in intelligence and popped out of a volcano. Are we keeping up?”

The homeless man outside of the church looked at Anna like she was crazy. She felt slightly insulted by that because he was actually crazy. She was waiting for Marcos to appear with his groomsmen. She had thought running her plan by a stranger might help but since the person she spoke to was clueless to the goings on of the world it was like talking to a brick wall. He wasn’t really giving her anything back so she slowly backed away from him before things became even more weird.

The white stretch limo pulled up, she could hear them howling which was the Gatherex custom when they got excited. They bundled out of the car rowdily and ran into the church. She was about to go into the side door of the building when the homeless man pulled at her leg. She looked down at him.

“And what will you do with the hand?” She smiled and walked into the church.

She wasn’t worried about how to navigate the building because this was the church where she was meant to marry Marcos. She knew it well. She was annoyed that this was where he was planning to marry Miranda. Even when she said the name in her head it was said with scorn, in a petulant child’s voice. She hated Miranda.

She moved through the building to the room they had picked together for the groom to get ready in. As is Gatherex tradition, the lone groom has 3 hours of quiet contemplation before he ties his tail (did she mention they have tails?) to his mate. Miranda was half Gatherex so she’d be able to actually do that. Anna and Marcos would have had to compromise and been bound by their hands instead. She got a little misty eyed at the memory.

She stood at the door. Don’t knock, Knock. Don’t knock. She didn’t knock and walked straight in. Marcos was angered at the interruption. He growled as he turned to face the intruder, bearing his teeth. She recoiled slightly, she’d never seen the beast side of him like this, he was like a big feral cat. As soon as he realised it was her, he calmed.

“Anna?” He relaxed and smiled. She smiled back. Something fluttered in her soul at the sight of him. In his suit, his fur smoothed, full and shiny. “What are you doing here?”

“I am here to ruin your day.” His laugh boomed around the room. “

You couldn’t ruin this day…again.”

“Excuse me. You dumped me!” She started to feel that anger that he made her feel, that only he could make her feel. It didn’t take much for him to get back under her skin. “Just keep talking because it just makes what I’m about to do easier.”

“Oh and what are you about to do?”

“In marriage? Been there, almost done that, glad I didn’t get the t-shirt.”

“No I want your actual hand.” She raised her arms over her head and grabbed the hilt of the sword, which she had hidden under her cape, and pulled out the intricately engraved weapon. Marcos’ eyes opened wide. She wasted no time in swinging that sword, lopping off Marcos’ right hand. He screamed a high pitched pained noise and fell to the floor holding the stump that was left behind. The blood spurted all over the formerly pristine Grooms’ suite. She picked up the hand and placed it into her plastic lined handbag. “I’m sorry and thank you. Your sacrifice is greatly appreciated. Anoras balutas mahina latayra.” Another shot of pain coursed through his body as she spoke.

The incantation was to heal his arm but she wasn’t going to tell him that the pain was going to be temporary. Suffering for a few minutes was the least he deserved for what he had done to her. She probably wouldn’t admit it aloud but it was possibly the most satisfying thing she could’ve done to her ex. Karma’s a bitch!

Another 1000 words done! Wahoo! And here’s to an idea that I might just run with! And I need to stop using so many exclamation marks!

Let’s keep growing and writing together!

Comments welcome below. Critiques, pity comments and ideas welcome. What would you do with the same premise?